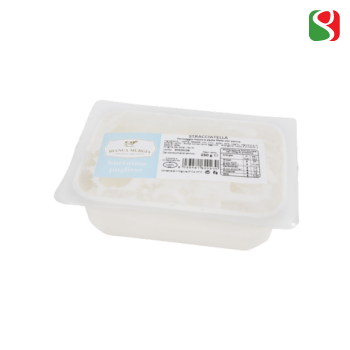 Unit: plastic basket
Qty: Contact us by email to order this item

Stracciatella is a term used for three different types of Italian food:

Stracciatella soft cheese (Italian pronunciation: [strattʃaˈtɛlla]) is a cheese produced from Italian cow milk in the province of Foggia, located in the southern Italian region of Apulia, using a stretching and a shredding technique (pasta filata) .

Stracciatella cheese is composed of small shreds—hence its name, which in Italian is a diminutive of straccia ("rag" or "shred") meaning "a little shred". It is a stretched curd fresh cheese, white in colour, and made the whole year round,but is thought to be at its best during the spring and summer months.

When mixed with thick cream, stracciatella is also used to make burrata (Italian for "buttered"): this is a rich, buttery textured cheese which comes enclosed in a bag of mozzarella and is thought to have been originally created in the early 20th century in Andria on the Murgia plateau. It is also now made outside Italy, especially in the United States and Argentina. Since neither stracciatella nor burrata keeps well even when refrigerated, these cheeses need to be consumed promptly, while they are still soft and fresh.


Recipes As most of soft cheeses Stracciatella can be used in wide array of recipes from a garnish element for pastas, pizzas, bruschettas to a simple cheese for appetizers togheter with olives, semi dry tomatoes and other pickels, with Italian salumis (Parma ham, Spianata piccante, Crudo al Tartufo, ecc.). Here a link to a wide list of recipes (in Italian language ...):  https://ricette.giallozafferano.it/ricette-con-la-Stracciatella/